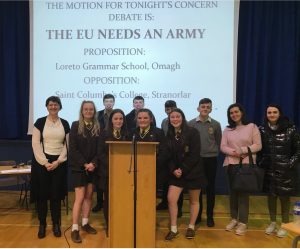 The Loreto Debating Group was formed in September 2019 by Mrs McGirr, who has a long-standing interest in debating stemming for her own involvement in a debating society at school some years ago!  She has experienced many long-term benefits from having participated in debating as a school-girl and is keen that the pupils at Loreto also have the opportunity to try it out.  Put simply – debating matters because ideas matter. Debating is a skill that fosters intellectual curiosity, encourages rigorous research and creates an environment which encourages deeper levels of knowledge and understanding about political, social and cultural issues.  It also develops high-level communication skills, building confidence to speak in public and developing the art of persuasive writing and speaking.  These skills are prized by universities and employers.

The ‘Concern’ debating competition, in which the debating team are currently participating, is organised by the charity ‘Concern’ and is a well-established all-island debating competition, running for over 30 years.  The girls compete in teams of four speakers in each debate, on rotation, and are supported by the other members of the debating team, as researchers.  The motions for debate are set by Concern and explore issues relating to development education, poverty, environment and security, and foster active citizenship principles.  The preparation for the debates is carried out at after-school meetings, and also at home by the girls involved.  There is usually a flurry of emails coming up to debate nights!

Since September, the girls have participated in two workshops – one on debating generally and the other on the United Nations Sustainable Development Goals – and in two ‘away’ debates and one ‘home’ debate, against St Patrick’s College, Maghera, Finn Valley College, Stranorlar, St Columba’s College, Stranorlar, respectively.  The debates take place in the evening time; we have really enjoyed the ‘craic’ on the bus to the ‘away’ debates and it has been a lovely opportunity for the girls to meet pupils in other schools.  Our dedicated core members are drawn from year 11-13: Beth Johnston, Ella Duffy, Saoirse Armstrong, Niamh Curran, Niamh Cullinan, Eimear McElduff, Eadaoin McKiernan, Cora McCabe and Orla Browne.  Our last debate was held at ‘home’ against Thornhill College, Derry on Wednesday 4th December at 7pm.