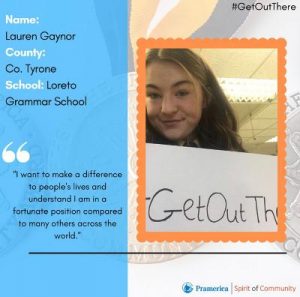 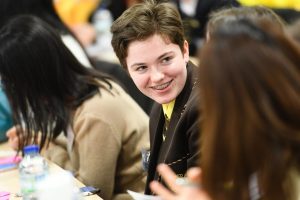 The HSBC Mandarin Speaking Competition is run by the British Council, is open to UK, Channel Island and Isle of Man secondary schools and is for non-native speakers of Mandarin Chinese. We are super proud of our Year 13 pupil, Ailis Keyes, who was the first ever participant in the advanced category of the Northern Irish heat, which took place on 20/11/2019.  Her Mandarin teacher, Zhang Xiaojing and SWC’s Mandarin Coordinator Linda Beatty, accompanied her to the event.  Ailis unfortunately didn’t make it through to the national final on this occasion, but it was an amazing achievement and a fantastic experience regardless.  Ailis agrees that participation in the competition at this high level has increased her motivation for learning the language, has developed her vocabulary and indeed improved her pronunciation.  Through her experience, Ailis has been inspired to discover even more about Chinese culture. 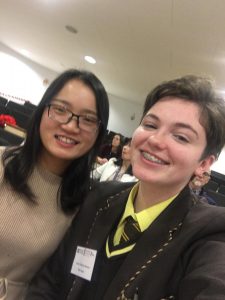 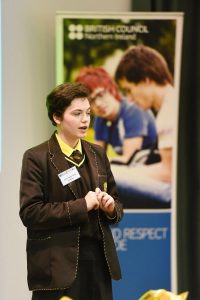 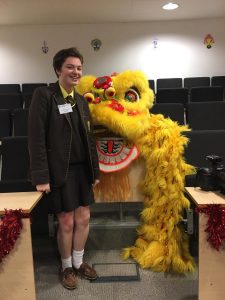 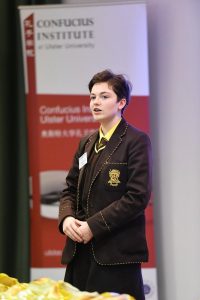 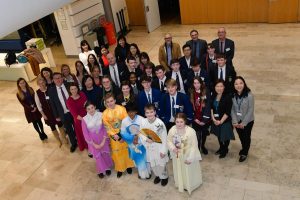 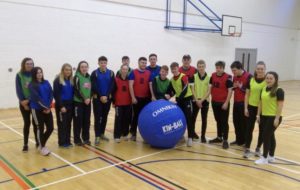 Our most recent Shared Education project commenced on Thursday 9th January 2020.  The Christian Brothers Grammar School and Arvalee School invited our pupils to participate in a three-day Sports Leadership Event. The aim is to develop their organisational, communication and team working skills as future Sports Leaders, culminating in an ‘Inclusive Games Event’ involving KS3 pupils from all six schools. 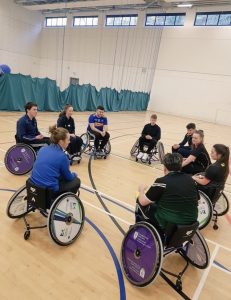 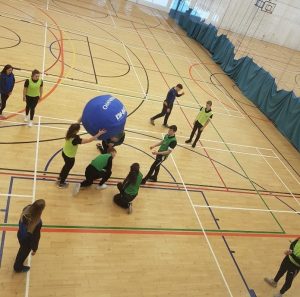 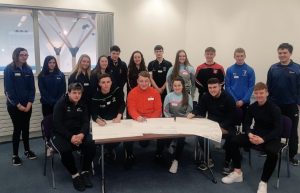 A prestigious awards ceremony was held on Tuesday 17th December in the Titanic Centre, Belfast, to celebrate the outstanding achievements of first place students in CCEA’s GCSE and GCE examinations.  Amongst the recipients were two pupils from Loreto, Aine and Maria.

Aine achieved first place in Northern Ireland in A’ Level Health & Social Care.  She is pictured (below) at the awards ceremony alongside our principal, Mrs O’Hanlon, her very proud teacher, Mrs McElroy and a CCEA representative.  Aine is currently studying at St. Mary’s University College Belfast. 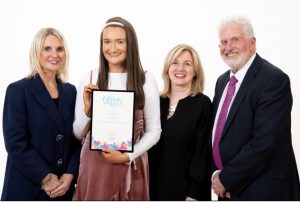 Also recognised on the evening was our Year 13 pupil, Maria who achieved first place in Digital Technology Programming at GCSE.  Maria is pictured (below) with CCEA Education Manager, Michael McEnery.  She is currently studying at A’ Level here in the school. 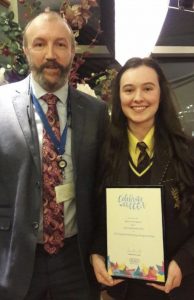 We are delighted with the success of these two girls and all of our pupils who contributed to the outstanding results achieved this year.

Debating Matters…
The Loreto Debating Group was formed in September this year by Mrs McGirr, who has a long-standing interest in debating stemming for her own involvement in a debating society at school some years ago…!  She has experienced many long-term benefits from having participated in debating as a school-girl and is keen that the pupils at Loreto also have the opportunity to try it out.  Put simply – debating matters because ideas matter. Debating is a skill that fosters intellectual curiosity, encourages rigorous research and creates an environment which encourages deeper levels of knowledge and understanding about political, social and cultural issues.  It also develops high-level communication skills, building confidence to speak in public and developing the art of persuasive writing and speaking.  These skills are prized by universities and employers.
The ‘Concern’ debating competition, in which the debating team are currently participating, is organised by the charity ‘Concern’ and is a well-established all-island debating competition, running for over 30 years.  The girls compete in teams of four speakers in each debate, on rotation, and are supported by the other members of the debating team, as researchers.  The motions for debate are set by Concern and explore issues relating to development education, poverty, environment and security, and foster active citizenship principles.  The preparation for the debates is carried out at after-school meetings, and also at home by the girls involved.  There is usually a flurry of emails coming up to debate nights!
Since September, the girls have participated in two workshops – one on debating generally and the other on the United Nations Sustainable Development Goals – and in two ‘away’ debates and one ‘home’ debate, against St Patrick’s College, Maghera, Finn Valley College, Stranorlar, St Columba’s College, Stranorlar, respectively.  The debates take place in the evening time; we have really enjoyed the ‘craic’ on the bus to the ‘away’ debates and it has been a lovely opportunity for the girls to meet pupils in other schools.  Our dedicated core members are drawn from year 11-13: Beth Johnston, Ella Duffy, Saoirse Armstrong, Niamh Curran, Niamh Cullinan, Eimear McElduff, Eadaoin McKiernan, Cora McCabe and Orla Browne.  Our next debate will be held at ‘home’ against Thornhill College, Derry on Wednesday 4th December at 7pm.  Please feel free to join us in the Assembly Hall – ‘volunteering does more harm than good’ is a controversial motion that is sure to get you thinking. 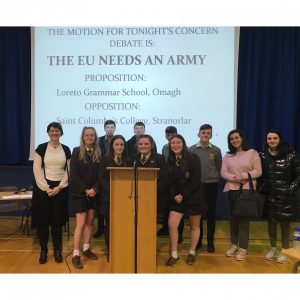 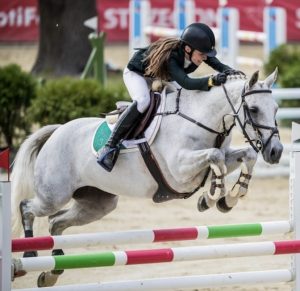 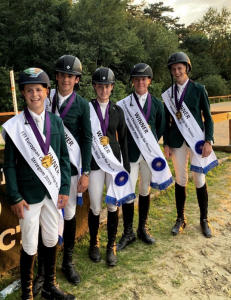 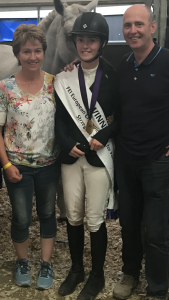